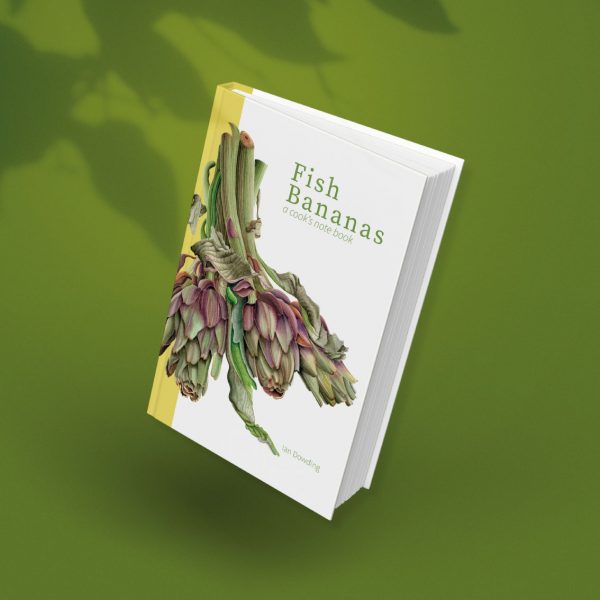 Paper back, can be signed on request

Salmon Caprice (a dish containing bananas) has been part of my repertoire for many years now and has become a family favourite. Many years ago I was amused when Monty Python created a song for a court room sketch that included the words ‘fish bananas’ amongst other randomly unconnected items such as pyjamas and mutton and since then I have always used this as a jokey shorthand for this dish – hence the title of this book.

Ian Dowding was the original head chef of The Hungry Monk Restaurant in Jevington East Sussex and was responsible along with the proprietor, Nigel Mackenzie, for the development of the dessert Banoffi Pie which has become a worldwide favourite. He went on to open his own restaurant (Quincy’s in Seaford) with his wife in 1988. In 2000 he became a freelance chef and consultant and was involved in a variety of projects. As well as teaching cookery evening classes at Sussex Downs College he worked on several TV programmes including Regency House Party (Channel 4), The Diets that Time Forgot (Channel 4), Turn Back Time (BBC 1), and Blizzard (BBC 2).

The recipes in this book are a record of my fifty years of cooking professionally. It is admittedly an odd selection reflecting the different areas I have worked in from the restaurant trade to teaching adults at college and in private cookery schools.

There is a mixture of traditional, old fashioned, modern, historical and international with home cooking and comfort food in there for good measure. Food in restaurants is about fashion and therefore some of the dishes I cooked in the sixties and seventies would look out of place on modern restaurant menus which does not mean they are not valid today.